Denis Colin has always wished to share music – his music, jazz in particular – with as many people as possible. After more than forty years of hitting stages everywhere, he is committed to pass on his own experience as much as possible. He has been engaged for years in many cultural activities, in various forms, aiming at a wide and extremely varied audience. Planning and setting up musical actions is always done according to the reception team requests, expert of the concerned territory. During those two last years, living close to theatres allowed him to work in music schools and conservatories, amateur practice associations, schools, colleges, high schools and ‘maisons de quartier’*.

Les Arpenteurs du Son, the association in charge of all his productions, is also registered as a training organisation. This allows him to work as a vocational trainer with music school teachers, ‘Intermittents du spectacle’* and ‘Dumistes’*. Since May 2013, Denis Colin is a graduate in somato-psychopedagogy, an approach which places the body at the heart of the learning process. 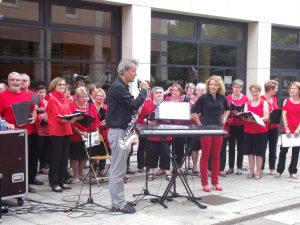 Epernay Concert with the “Senior” choir

Here are some of his accomplishments:

– College and high schools: depending on the level of the student, study of the relation between music and cinema (movies concert creation, mise-en-place*/rehearsal included, animated film sound effects, cinema scenes sound illustration, etc.), “Jazz à la cantine” workshop (introduction to jazz, pupils presenting jazz standards – which will be finally played by a trio), work with CHAM* according to the school project.

– Flash Workshops: intended for late starters who are considering learning or relearning music

– Workshop “T’écoutes quoi?”: commented listening and sharing of pieces of music favourite to each one. All audiences.

* Dumistes
(from Diplôme Universitaire de Musicien Intervenant)
The ‘dumiste’ is a musician who builds the child musical awareness through school projects – often in partnership with conservatories, orchestras and sociocultural structures.

* Mise en place
The ‘mise en place’ is part of the rehearsal. Its concerns the structural and rhythmic collage of instrument sections and/or choirs and/or soloists.

* CHAM
(from Classes à horaires aménagés musique)
In a CHAM, a significant part of the school time is devoted to music. Students share their time between school and conservatory.